What is Osmosis (OSMO): A Beginner’s Guide to the Cosmos AMM

Osmosis is an automated market maker (AMM) built with the Cosmos SDK; it specializes in the InterchainDeFi movement (Tendermint-based blockchains) in the Cosmos ecosystem. In other words, Osmosis is a decentralized exchange specifically built for Cosmos, with plans to expand to more blockchains.

Think of Cosmos as the sandbox, and Osmosis as something that can connect all the various dApps. As a DEX, Osmosis nurtures a heterogeneous and interoperable cross-chain trading experience. 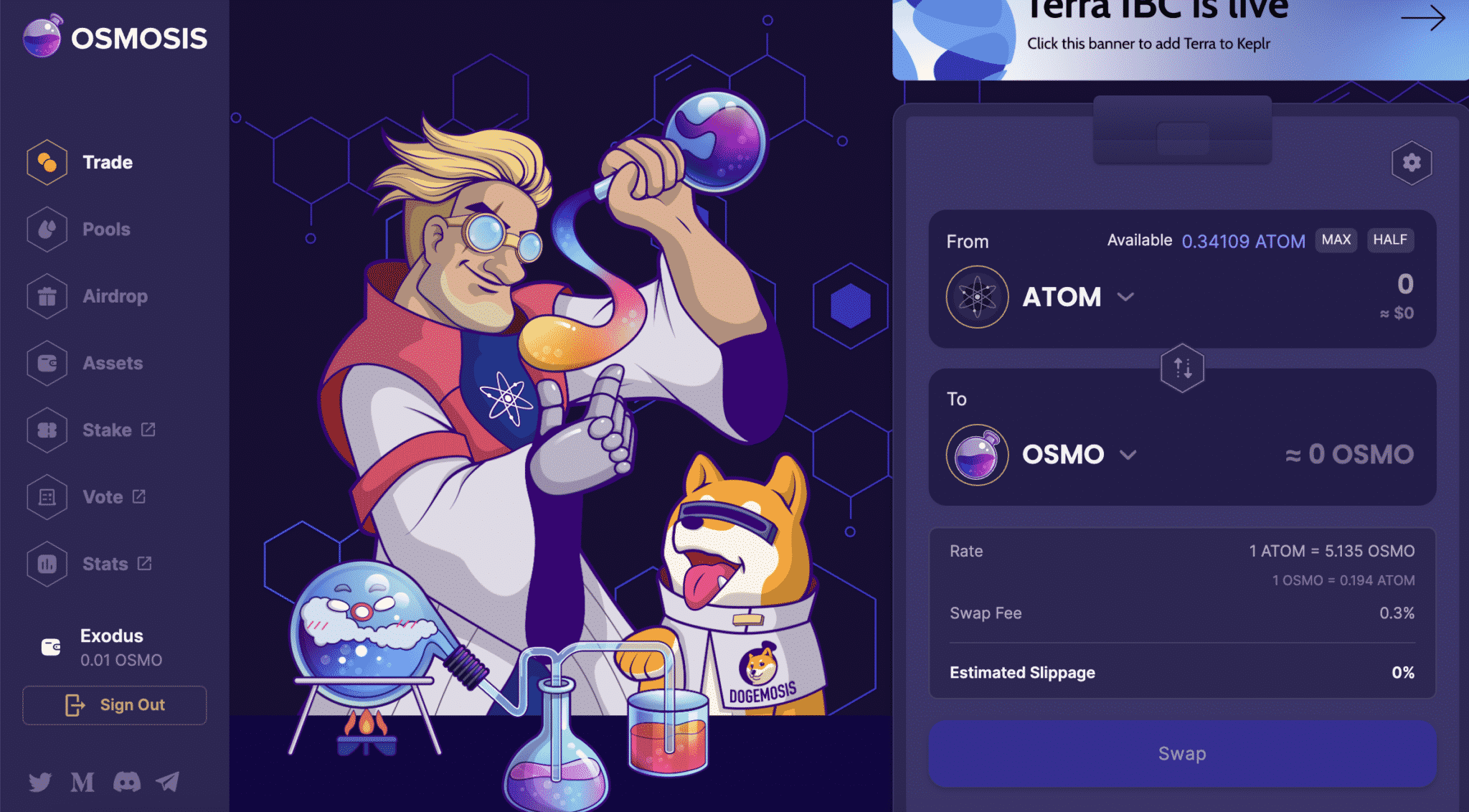 Osmosis is currently the most dominant, accounting for roughly 40% of the total inter-blockchain transfers on Cosmos. IBC compatible blockchains (such as Cosmos, Regen, Akash, and more) can be seamlessly swapped on Osmosis, with fees generally under $1.00.

To best understand the Osmosis value proposition, it’ll help to first explore the Cosmos ecosystem and some DeFi & DEX basics.

Sovereignty and heterogeneity are two key pieces of the Cosmos (and Osmosis) mission, and you’ll see them echoed in almost every feature.

Osmosis can be accessed by its main site: https://app.osmosis.zone/.

Osmosis is a product by Osmosis Labs, founded by Sunny Aggarwal and Josh Lee.

While Osmosis Labs Pte. Ltd. ( “Osmosis Labs” ) is responsible for most of the initial code development for the Osmosis protocol, the Osmosis project is actually run by a decentralized validator set. Every upgrade and modification to the protocol is voted on and carried out by the Osmosis community (holders of the OSMO governance token.)

As such, no single entity involved in Osmosis is legally liable for claims or damages, hence the “decentralized” nature of the protocol.

Osmosis is designed to be cross-chain native, and like many Cosmos projects, it’s built to be IBC compatible at its foundation.

Osmosis plans to branch out to non-IBC enabled chains, such as Ethereum-based ERC20s (via the Althea gravity bridge), Bitcoin-like chains, and alternative smart contracting platforms (via custom pegs.)

Sovereignty is a big deal for the Cosmos folks. Osmosis derives its sovereignty from its architecture, as well as from the collective sovereignty of liquidity providers –each LP is incentivized to simultaneously maintain their autonomy and provide liquidity by different mechanisms.

Osmosis is unique within the Cosmos ecosystem (and other DEXes) because it aligns liquidity providers, DAO members, and delegator interests with a variety of incentives. For one, staked liquidity providers have sovereign ownership over their pools, and they can adjust parameters based on market conditions and how competitive the pool is among others. Nothing in the Osmosis AMM is hard-coded– LP providers can vote to change any pool parameter, such as swap fees, token rates, reward incentives, and curve algorithms.

Liquidity pools on Osmosis are self-governing, and completely customizable through their governance.

This feature promotes heterogeneity with the intent to create a competitive and nurturing atmosphere of rapid iteration and experimentation. This heterogeneity is achieved through an array of customization options. While most DEXes rely on bonding curves, Osmosis allows for dynamic adjustments of swap fees, multi-token liquidity pools, and custom-curve AMMs. Theoretically, the Cosmos AMM can enable the decentralized formation of token fundraisers, an options market, and even interchain staking.

In the traditional DeFi industry, token holders must choose between generating yield from staking (which maintains the protocol) or from liquidity (which provides AMM stability.)

So, a liquidity provider or staker in Osmosis will earn rewards from providing liquidity and staking, whereas other platforms require token holders to make a tradeoff.

For example, someone in an OSMO-AKT pool will receive that pool’s LP tokens, which can be staked to secure both Osmosis and Akash networks. The user would generate yield from the LP rewards as well as staking rewards.

How to Use Osmosis

There are a few ways to use Osmosis, and it’s best to follow the money. There are three categories of fees on Osmosis:

So, anyone can use the Osmosis DEX functionality to swap IBC-compatible tokens like ATOM, ION, AKT, LUNA, and other compatible chains like CRO.

Liquidity providers can add liquidity to a pool and earn the pool’s swap fees (determined by the pool owner, usually around 0.3%) and receive LP tokens, which can be bonded for durations of 1 day, 7 days, and 14 days.

Osmosis makes it possible for other projects to add incentive mechanisms to pools. For example, if the Cosmos Hub Community Pool wanted to incentivize liquidity for an ATOM-stablecoin pair, they could distribute ATOM rewards using the Osmosis built-in incentive module.

These incentives aim to encourage long-term liquidity, not a short-term mercenary farmer model, where yield farmers move from pool to pool, seeking the best yield. In practice, a project could provide higher incentives for LPs who time lock their LP tokens for more extended periods, decreasing liquidity volatility.

Staking can be done through Keplr, the primary wallet for the Cosmos ecosystem and Osmosis project.

Osmosis token holders can also vote on a variety of governance proposals through Keplr; this is how the decentralized project is run. What is $OSMO, the Osmosis Governance Token

OSMO is the native Osmosis token, and it underpins the entire Osmosis protocol, and it facilitates everything from liquidity mining reward allocation and the base network swap fee.

As a governance token, OSMO enables holders to decide the strategic direction of the project. It can be used to vote on upgrades to the protocol, allocate liquidity mining rewards for specific liquidity pools, and set the base network swap fee.

OSMO token holders determine which pools are eligible for liquidity rewards with the goal of aligning stakeholders and LPs with the longevity of the protocol.

OSMO is unique in that it can be used to stake and provide liquidity at the same time.

The OSMO tokenomics are as follows:

At genesis, an initial supply of 100 million OSMO, split between Fairdrop recipients and strategic reserve.

Osmos has events in which new tokens are released called “daily epochs.” The newly released tokens are distributed as follows:

Token inflation is based on a “thirdening” model, where token issuance is cut by a third every year. For example:

…until the total supply of 1 billion OSMO is released.

Final Thoughts: Keep Your Eyes on Osmosis (and Cosmos)

As the most popular DEX in the Cosmos ecosystem, Osmosis has positioned itself to be one of the first Cosmos dApps many newcomers interact with. However, it seems the Osmosis mission goes far beyond simply just being a foundational pillar in Cosmos.

With the potential to connect other token blockchains (such as ERC-20s) into a network where fast and cheap value transfer is possible, the path ahead for Osmosis looks bright.

The bulk of the network’s early traction seems to revolve around providing liquidity and staking. By design, Osmosis is a very interesting case study in motion of how a DEX can offer an alternative to mercenary yield farming practices, potentially leading to a better and more stable trading experience for all.

The post What is Osmosis (OSMO): A Beginner’s Guide to the Cosmos AMM appeared first on CoinCentral.

What Is Cardano (ADA)? | The All-Inclusive Guide

Analyzing Charts: How to read a chart